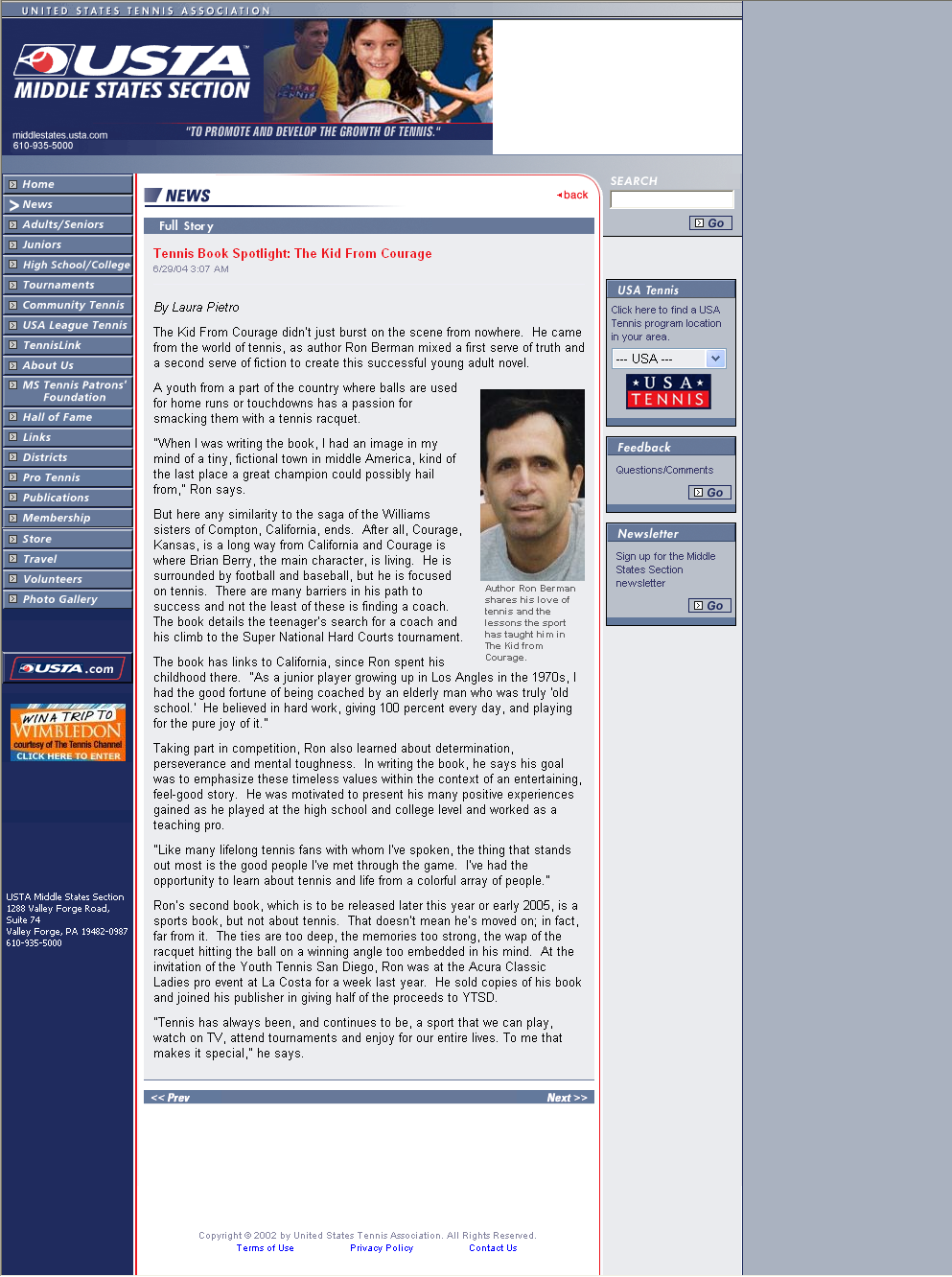 The Kid From Courage didn’t just burst on the scene from nowhere. He came from the world of tennis, as author Ron Berman mixed a first serve of truth and a second serve of fiction to create this successful young adult novel.

A youth from a part of the country where balls are used for home runs or touchdowns has a passion for smacking them with a tennis racket.

“When I was writing the book, I had an image in my mind of a tiny, fictional town in middle America, kind of the last place a great champion could possibly hail from,” Ron says.

But here any similarity to the saga of the Williams sisters of Compton, California, ends. After all, Courage, Kansas, is a long way from California and Courage is where Bryan Berry, the main character, is living. He is surrounded by football and baseball, but he's focused on tennis. There are many barriers in his path to success and not the least of these is finding a coach. The book details the teenager’s search for a coach and his climb to the Super National Hard Courts tournament.

The book has links to California, since Ron spent his childhood there. “As a junior player growing up in Los Angeles in the 1970s, I had the good fortune of being coached by an elderly man who was truly ‘old school.’ He believed in hard work, giving 100 percent every day, and playing for the pure joy of it.”

Taking part in competition, Ron also learned about determination, perseverance and mental toughness. In writing the book, he says his goal was to emphasize these timeless values within the context of an entertaining, feel-good story. He was motivated to present his many positive experiences gained as he played at the high school and college level and worked as a teaching pro.

“Like many lifelong tennis fans with whom I’ve spoken, the thing that stands out most is the good people I've met through the game. I've had the opportunity to learn about tennis and life from a colorful array of people.”

Ron’s second book, which is to be released later this year or early 2005, is a sports book, but not about tennis. That doesn't mean he's moved on; in fact, far from it. The ties are too deep, the memories too strong, the wap of the racquet hitting the ball at a winning angle too embedded in his mind. At the invitation of the Youth Tennis San Diego, Ron was at the Acura Classic Ladies pro event at La Costa for a week last year. He sold copies of his book and joined his publisher in giving half of the proceeds to YTSD.

“Tennis has always been, and continues to be, a sport that we can play, watch on TV, attend tournaments and enjoy for our entire lives. To me that makes it special,” he says.