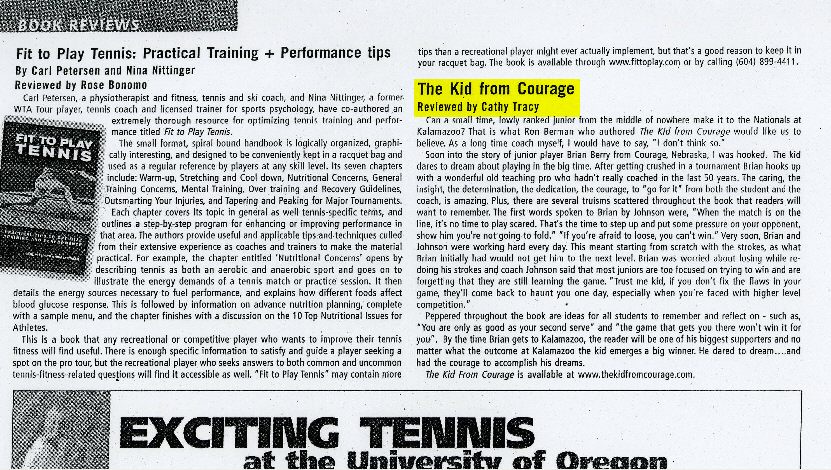 ​The Kid from Courage
Reviewed by Kathy Tracy

Can a small-time, lowly ranked junior from the middle of nowhere make it to the Nationals at Kalamazoo? That is what Ron Berman, who authored The Kid from Courage, would like us to believe. As a long time coach myself, I would have to say, “I don't think so.”

Soon into the story of junior player Bryan Berry from Courage, Kansas, I was hooked. The kid dares to dream about playing in the big time. After getting crushed in a tournament, Bryan hooks up with a wonderful old teaching pro who hadn't really coached in the last 50 years. The caring, the insight, the determination, the dedication, the courage, to “go for it,” from both the student and the coach, is amazing. Plus, there are several truisms scattered throughout the book that readers will want to remember. The first words spoken to Bryan by Johnson were, “When the match is on the line, it's no time to play scared. That's the time to step up and put some pressure on your opponent, show him you're not going to fold.” “If you're afraid to lose, you can't win.” Very soon, Bryan and Johnson were working hard every day. This meant starting from scratch with the strokes, as what Bryan initially had would not get him to the next level. Bryan was worried about losing while re-doing his strokes and Coach Johnson said that most juniors are too focused on trying to win and are forgetting that they still are learning the game. “Trust me kid, if you don't fix the flaws in your game, they'll come back to haunt you one day, especially when you're faced with higher level competition.”

Peppered throughout the book are ideas for all students to remember and reflect on--such as, “You are only as good as your second serve,” and, “The game that gets you there won't win it for you.” By the time Bryan gets to Kalamazoo, the reader will be one of his biggest supporters and no matter what the outcome at Kalamazoo the kid emerges a big winner. He dared to dream...and had the courage to accomplish his dreams.
​
The Kid from Courage is available at www.TheKidFromCourage.com