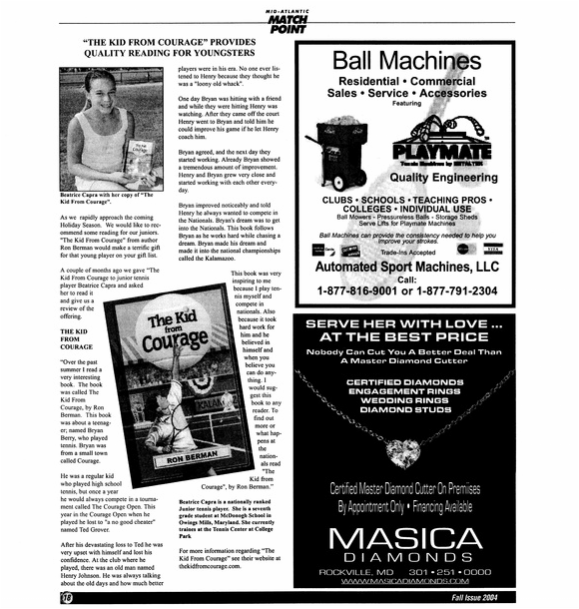 
“THE KID FROM COURAGE” PROVIDES QUALITY READING FOR YOUNGSTERS

As we rapidly approach the coming Holiday Season, we would like to recommend some reading for our juniors. "The Kid From Courage" from author Ron Berman would make a terrific gift for that young player on your gift list. A couple of months ago we gave “The Kid From Courage to junior tennis player Beatrice Capra and asked her to read it and give us a review of the offering.


THE KID FROM COURAGE
“Over the past summer I read a very interesting book. The book was called The Kid From Courage, by Ron Berman. This book was about a teenager; named Bryan Berry, who played tennis. Bryan was from a small town called Courage.


He was a regular kid who played high school tennis, but once a year he would always compete in a tournament called The Courage Open. This year in the Courage Open when he played he lost to "a no good cheater" named Ted Grover.


After his devastating loss to Ted he was very upset with himself and lost his confidence. At the club where he played, there was an old man named Henry Johnson. He was always talking about the old days and how much better players were in his era. No one ever listened to Henry because they thought he was a "loony old whack".


One day Bryan was hitting with a friend and while they were hitting Henry was watching. After they came off the court Henry went to Bryan and told him he could improve his game if he let Henry coach him.


Bryan agreed, and the next day they started working. Already Bryan showed a tremendous amount of improvement. Henry and Bryan grew very close and started working with each other everyday.


Bryan improved noticeably and told Henry he always wanted to compete in the Nationals. Bryan's dream was to get into the Nationals. This book follows Bryan as he works hard while chasing a dream. Bryan made his dream and made it into the national championships called the Kalamazoo.

​
This book was very inspiring to me because I play tennis myself and compete in nationals. Also because it took hard work for him and he believed in himself and when you believe you can do anything. I would suggest this book to any reader. To find out more or what happens at the nationals read "The Kid from Courage", by Ron Berman.”


Beatrice Capra is a nationally ranked Junior tennis player. She is a seventh grade student at McDonogh school in Owings Mills, Maryland. She currently trains at the Tennis Center at College Park