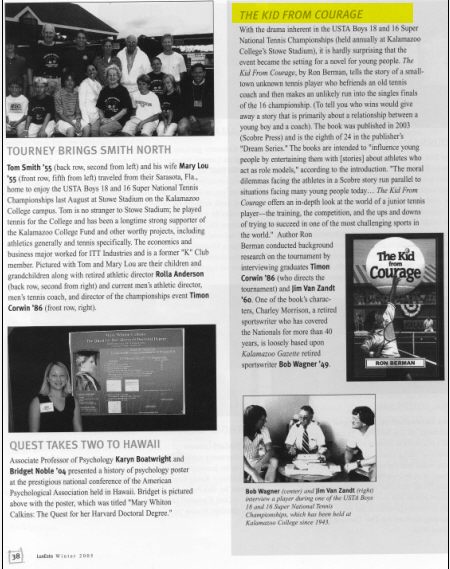 ​THE KID FROM COURAGE
​
With the drama inherent in the USTA Boys 18 and 16 Super National Tennis Championships (held annually at Kalamazoo College’s Stowe Stadium), it is hardly surprising that the event became the setting for a novel for young people. The Kid from Courage, by Ron Berman, tells the story of a small-town unknown tennis player who befriends an old tennis coach and then makes an unlikely run into the singles finals of the 16 championships. (To tell you who wins would give away a story that is primarily about a relationship between a young boy and a coach). The book was published in 2003 (Scobre Press) and is the eighth of 24 in the publisher’s “Dream Series.” The books are intended to “influence young people by entertaining them with [stories] about athletes who act as role models,” according to the introduction. “The moral dilemmas facing the athletes in a Scobre story run parallel to situations facing many young people today…The Kid from Courage offers an in-depth look at the world of a junior tennis player—the training, the competition, and the ups and downs of trying to succeed in one of the most challenging sports in the world.” Author Ron Berman conducted background research on the tournament by interviewing graduates Timon Corwin ‘86 (who directs the tournament) and Jim Van Zandt ‘60. One of the book’s characters, Charley Morrison, a retired sportswriter who has covered the Nationals for more than 40 years, is loosely based upon Kalamazoo Gazette retired sportswriter Bob Wagner ‘49.