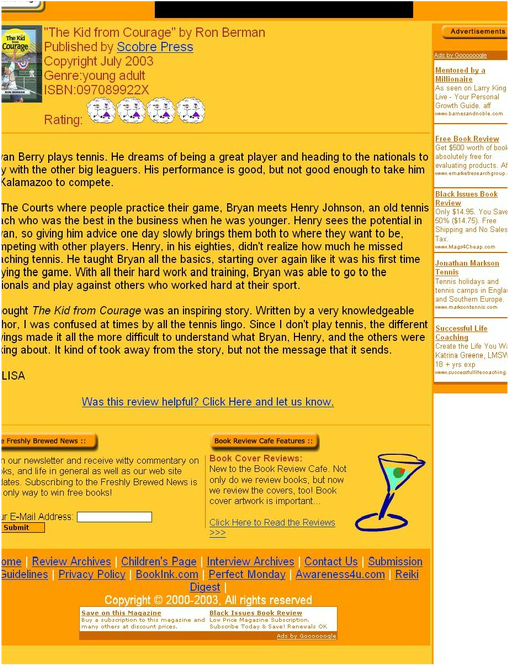 ​Bryan Berry plays tennis. He dreams of being a great player and heading to the national to play with the other big leaguers. His performance is good, but not good enough to take him to Kalamazoo to compete.

At The Courts were people practice their game, Bryan meets Henry Johnson, an old tennis coach who was the best in the business when he was younger. Henry sees the potential in Bryan, so giving him advice one day slowly brings them both to where they want to be, competing with other players. Henry, in his eighties, didn't realize how much he missed coaching tennis. He taught Bryan all the basics, starting over again like it was his first time playing the game. With all their hard work and training, Bryan was able to go to the nationals and play against others who worked hard at their sport.

I thought The Kid from Courage was an inspiring story. Written by a very knowledgeable author, I was confused at times by all the tennis lingo. Since I don't play tennis, the different sayings made it all the more difficult to understand what Bryan, Henry, and the others were talking about. It kind of took away from the story, but not the message that it sends.